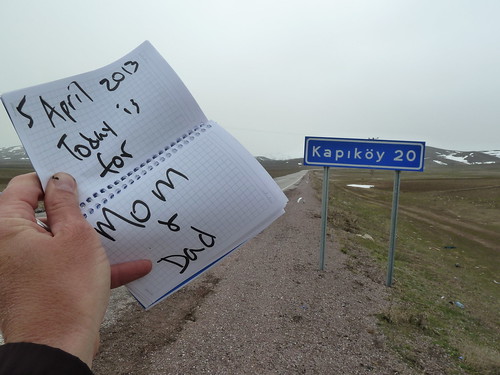 Friday, 5 April, the last full day of the walk, was for my mom and dad.

Without them I would be unable to do pretty much anything in life because, well, I probably wouldn’t be here to start with.

But seriously, thanks Mom and Dad. Your restraint when your sons have gone off to do unusual things that would worry any parent to death is, I think, one of the greatest gifts parents can give their children. 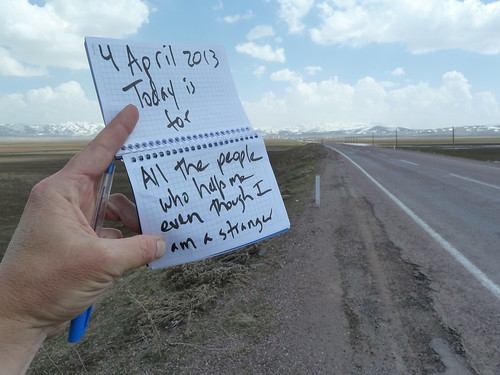 I get a lot of help from strangers who, I have to continually remind myself, consider me a stranger too.

It astounds me that people here stop regularly to help, or offer help to, a foreigner who barely speaks the local language and is, get this, out WALKING in a deserted area miles from the nearest town, and who talks some bizarre BS about walking all the way across the country. And they offer that help without even blinking an eye, as if something unusual happens here every day. Because, as I’ve learned, it kind of does. 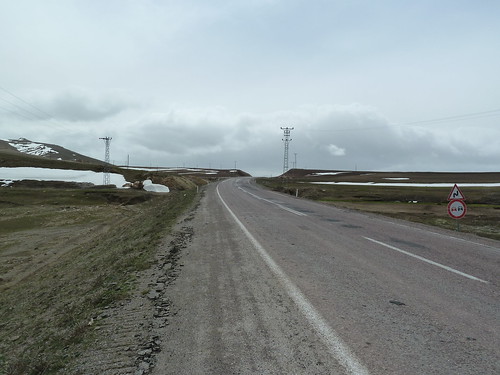 This was the walk’s highest point. I reached it Friday. 7500 feet (2300 meters) above sea level. For some reason I was expecting a marching band, a big parade, and a ribbon-cutting ceremony of some sort, but all I found when I actually got there was a stiff headwind. No traffic, no people, nothing but wind. 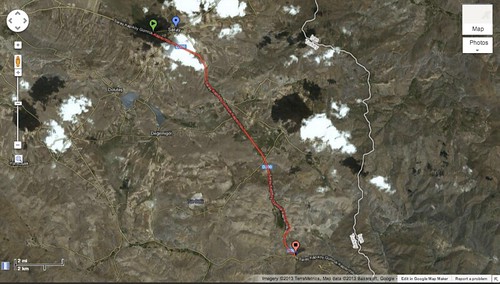 Today I walked to Saray, the last little town I’ll see on the way to the border.

Tomorrow’s walk will be 19 kilometers to a turnoff that marks the "5 km to go" point, where I’ll leave the rest for Saturday, 13 April. 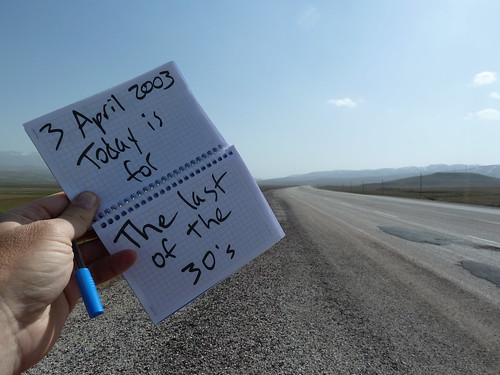 For more than 3 months I have been walking mostly 30’s (30 kilometers, or 19 miles, in a day). Today was the last such day. I have two days left, and they are both under 20 kilometers each.

It takes me 6 hours to walk 30 kilometers. I often walk those 6 hours without stopping, not even for a few minutes, not even once. I am amazed and thankful that my hips, knees, and feet can keep moving like that for 6 straight hours, day after day, knock on wood.

On the way out of Van today I walked past a garbage dump. A bunch of mangy dogs barked at me.

I walked a little further. A puppy, probably only about 10 weeks old, raised its head and started screeching at me. I hadn’t heard a dog make that noise before. “What the…?!” I wondered.

I looked at him closer. He was resting against his dead mother. By the looks of her, she had been hit by a car a couple days before. The flies were starting to settle in.

The puppy continued his screeching. He ran out to greet me. He began following me, running about one step behind me on his little puppy legs. He was clean and fluffy and cute. He did not yet have any of that unkempt manginess that besets dogs living the stray life.

A few steps later we passed another puppy, this one slightly older. He was munching on the remains of another dog who had been hit by a car and whose body had been torn open by the impact.

Packs of mangy dogs. Orphaned puppies. Cannibalism. It was like I was walking through a dog version of Cormac McCarthy’s The Road.

The little puppy continued following me. In fact, it followed me for three kilometers, a full half hour of walking. Every once in a while I would look down and there it was, trying to keep up, running along on its little puppy legs.

“No, I’m sorry, I can’t take care of you,” I tried to explain to it. “I’m going to have to leave you at the end of the day. Go. You have to go.” I felt like Clint Eastwood in Gran Torino, the movie where he was torn between not getting attached to someone new, and playing father figure to a young Asian kid who needed some help.

Finally, another dog came running across the street at us. This other dog was not happy to have a stranger entering his territory. But then the puppy started screeching that strange, desperate, lonely, orphaned screech of his, and the other dog slowed down. He approached the puppy carefully. The puppy continued screeching, like he was saying, “Don’t hurt me, don’t hurt me, I just need a home.” My eyes began to water, because there have been times in my life when I have felt like that, too.

The dogs touched noses, as dogs tend to do when they say hello to each other. Three village kids came running out to see what the commotion was about. They saw the puppy and started playing with it. When it looked like the puppy might have found a new home, I walked on.

Perhaps this video should be called the “God, Matt looks tired” video. 😉

The camera battery died on me in mid-sentence too, and I didn’t even bother to change to a new battery. I just thought, “I guess we’re done then,” and stuffed the camera back in my bag. 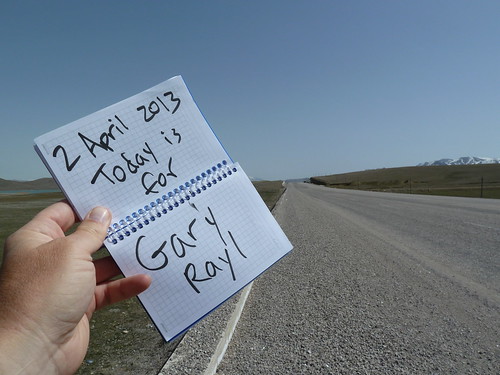 Gary was one of the Resident Heads (read: adult supervision) at my dorm at the University of Chicago. We have stayed in touch since. He is a retired teacher, runs marathons like a maniac, and does things like hike the Appalachian Trail.

I learned a few simple but important lessons from that experience. Here’s one that’s helping me now…

When I would approach a major milestone (500 miles, for example, or 1000 miles) I would find myself feeling that those miles were more difficult than the miles that preceded them. My spirit would drag. I would have a hard time getting out of bed in the morning, or I would have to dig unusually deep to finish the day’s walk.

I found myself answering, “Well, actually, it’s not. Mile 999 is a mile, just like any of those other miles. So I will walk mile 999 just like I did the miles that preceded it.”

I am using that same lesson here in the final week.

The last mile isn’t the hardest unless I think it is. 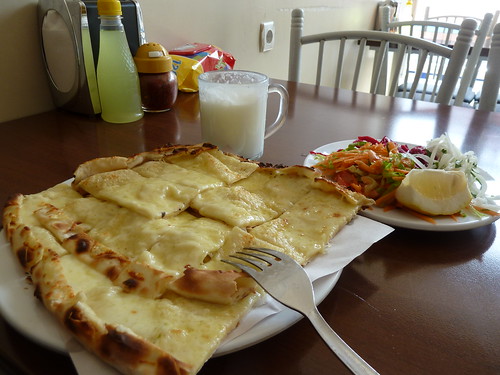 Thin flatbread, mild white cheese similar to mozarella, and, just for additional greasy goodness, plenty of butter. Ayran and salad on the side.

If I had to live the rest of my life on kaşarlı pide, ızgara köfte, and kuru fasulye ve pilav, I’d be fine with that.