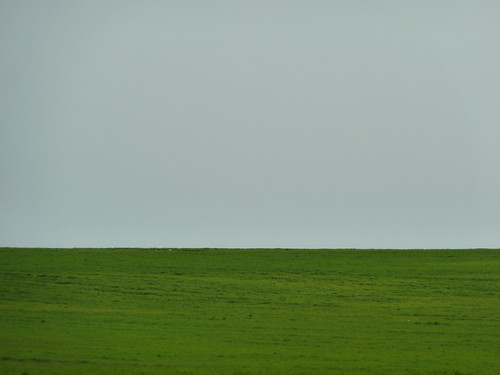 This one without the tree.

Alper is a friend of mine from Istanbul Toastmasters.

At dinner last month he asked me what I could offer the world that few others could. When I told him, he raised an eyebrow and said, "Do you know how valuable that skill is?" For me it was one of those "open your eyes and see what’s right in front of you" moments.

Unfortunately, my eyes closed back up shortly after the conversation — closed seems to be their default position these days. But I know there’s something out there I should be seeing. Thanks, Alper!

Today’s walk was 26 kilometers (16 miles) from Bağdere to Silvan. In Silvan I snacked on peynirli kol böreği and çay. While eating I learned about the history of the area and found out the Bible is broken. Then I hopped a bus back to Diyarbakır for my final night in that city.

Today I started to notice the mountains closing in on me. In about a week I’ll start the climb up onto a higher plateau, the plateau I’ll finish the walk on. 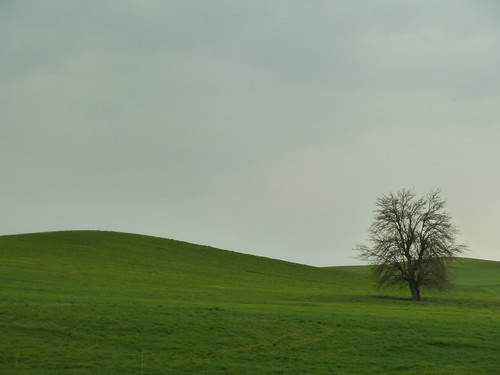 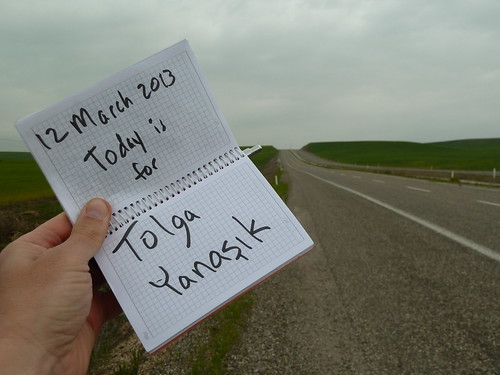 Tolga is a friend of mine from Istanbul Toastmasters. He and I have been friends since my first go-around in Istanbul, in 2008.

Today’s walk was 25 kilometers (16 miles) from Çölağan to Bağdere, two villages between Diyarbakır and Silvan.

On the bus today someone asked me what this region was called. There are a couple possible answers, and for those answers wars have been fought, and are still being fought, and people give, and take, lives.

I didn’t want to get involved. It’s not my fight. I just want to walk across the country. So I answered the best I could: a smile, and an “I don’t know, you tell me.” 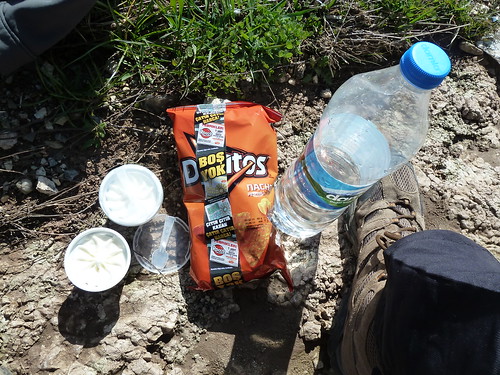 İsmaıl and İshak, the owners of Ortaçlar, wanted to make sure I mentioned their gasoline station in particular. So the next time you find yourself in need of fuel in Köprübaşı, 20 kilometers east of Diyarbakır, be sure to stop by Ortaçlar Petrol. Ask for the fill-up special, and tell them Matt sent you. 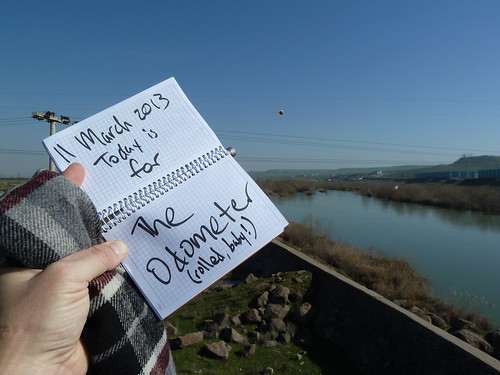 Usually "today is for…" is about a person in my life who has inspired or helped me in some way.

Today, however, was for odometers around the world, because today I rolled my trip odometer. The Tigris (Dicle) river marked my 1,000th mile (1,600 kilometers) on the walk. That’s the Tigris in the background, by the way.

Today’s walk was 30 kilometers (19 miles) from Diyarbakir to Colagan. It was sunny and warm today, with, once I got out of Diyarbakir, scenery that was mostly rolling hills, wheat, and barley. 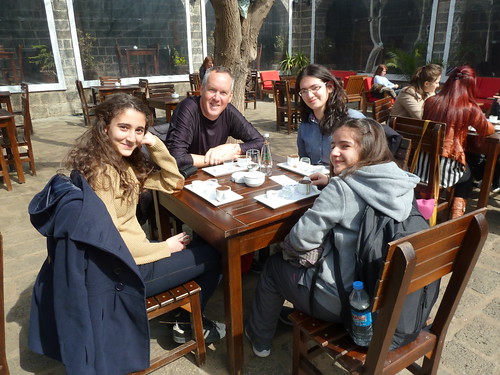 This was in Sülüklü Han, a courtyard in Diyarbakır. 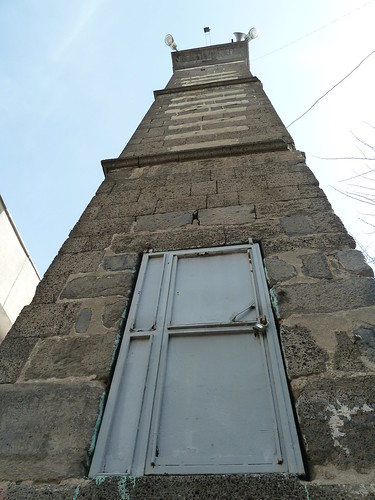 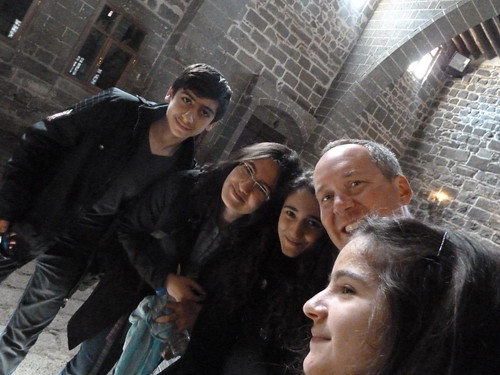 This was in a Catholic church. 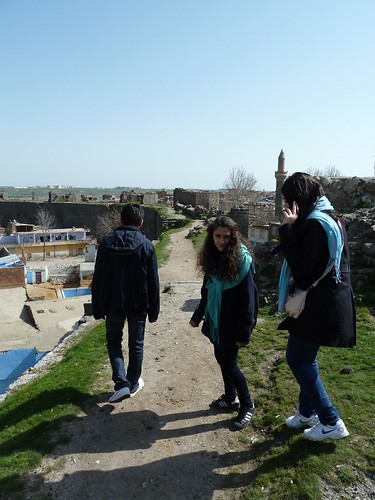 Today’s tour included a climb around on the city walls. Ezgi and I are both a little afraid of heights, so we were both happy to get back on terra firma.

Today I spent the day at Rekabet Kurumu Cumhuriyet Fen Lisesi, a science high school in Diyarbakır. I was a guest of Nazile Çelik, one of the school’s English teachers. Nazile is a friend of Mesut and Hülya, my hosts in Diyarbakır.

This particular school is pretty hard to get into. The students have to pass a special exam to enter. They work very hard, going to school during the week and then taking 4 hours of additional classes at dershaneleri (supplementary study schools) on Saturdays AND Sundays. In other words, they study a lot. Chess, table tennis, and volleyball seem to be the most popular extra-curricular activities. Almost half of the students want to be doctors.

The students get so excited, and I get so confused and so overwhelmed, and in the hallways a million people talk to me at once and I don’t know who to focus on, but once I get in front of the class and start talking with the students I forget that anything else in the world exists. It’s just me and the students in front of me. 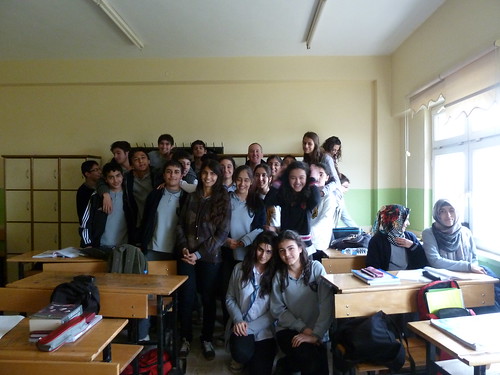 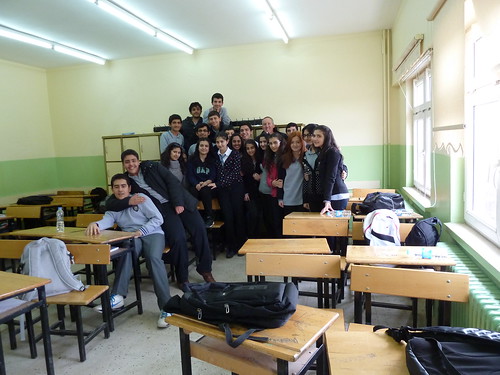 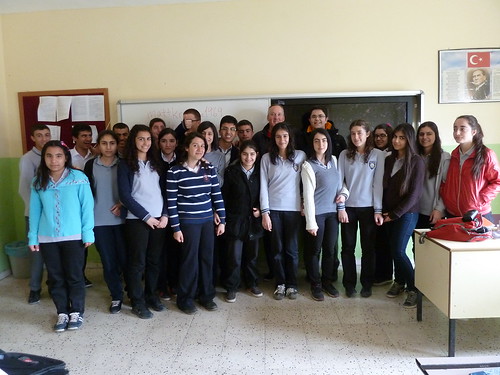 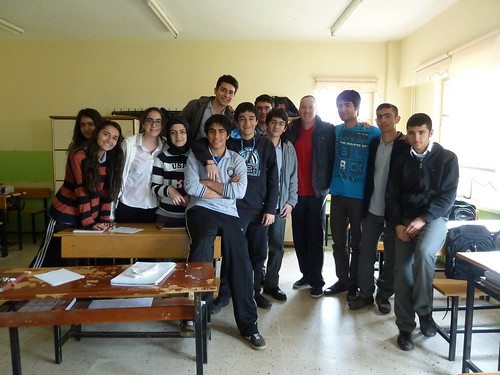 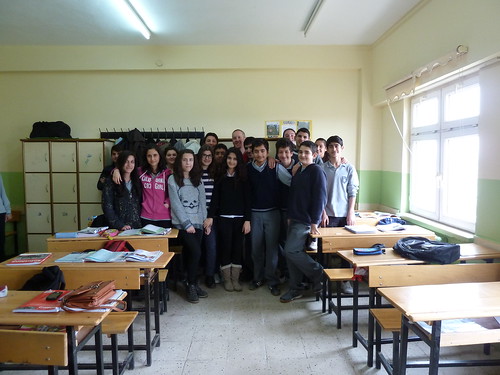 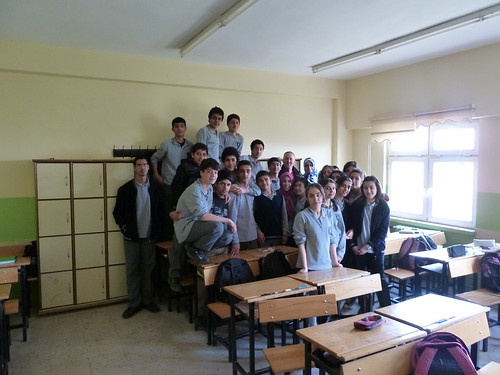 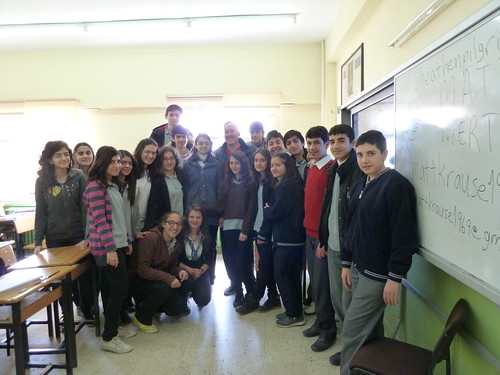 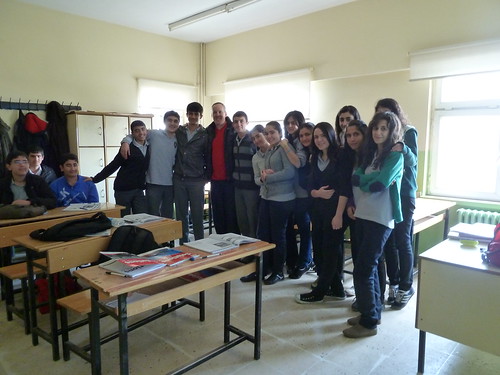 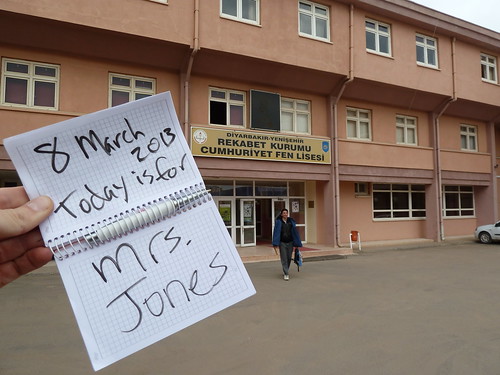 Mrs. Jones was my 4th grade teacher. I lost track of her, so I have not spoken to her since I was 10 years old.

She praised my drawing of aliens on Jupiter, even though those aliens looked uncannily like Chewbacca with big thighs.

She is the reason I know the words to "California Dreaming" by The Mamas and The Papas.

She is also the reason why every time I hear "My Sharona" by The Knack I think of how I brought that 45 to class one Friday and we played it on the record player, and my fellow students were amazed someone as geeky as me could like the same music they did.

Even now, when people ask me who my favorite teacher was, I say Mrs. Jones. 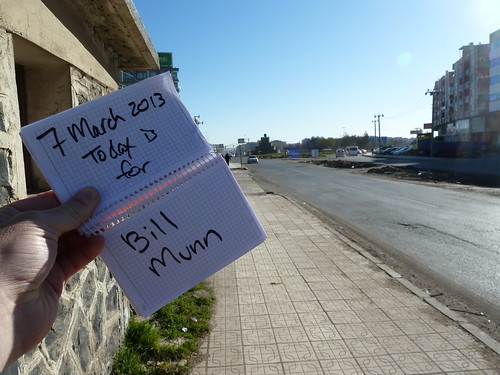 When I was 15 I lived in Visalia, California. On Saturday mornings a bunch of us would ride our bicycles to Rocky Hill, one of the foothills of the Sierras.

One day Bill Munn came with us. He was a patriarch of the Visalia cycling scene at that time, but he wasn’t always a regular at the Saturday morning rides, even though they started in front of his shop.

At that time Bill was about 35, I guess. He was, shall we say, a little bit heavier than the rest of us.

We young bucks got to the top of Rocky Hill way ahead of Bill. While waiting for Bill, some of us rode around idly in circles, while some of us just sat on our bikes and leaned against the bars.

Bill worked pretty hard up that hill. At the top he slowed down and said some words I’ll probably laugh at for the rest of my life: "I can’t breathe, I need a cigarette."

By the time he came to a full stop he had pulled a cigarette out of his pocket, lit it, and started puffing away.

By the way Bill, while I was writing this (I typically write by hand in my notebook, and then upload to a computer later) the cops stopped to pat me down and check my documents. They looked through my notebook and asked, "Who is Bill Munn?"

So now the cops in southeast Turkey know you, too. 😉 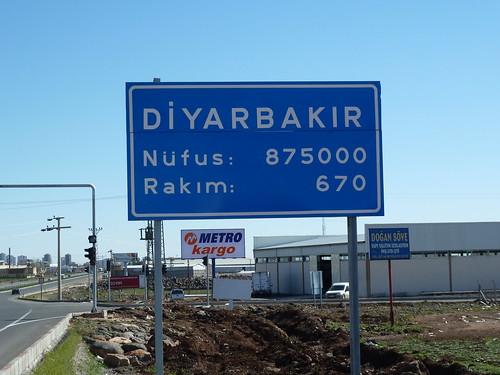 I suspect I am tired, but I also suspect that if I were tired I would not know it. So I’ll be taking 3 days off.

Tomorrow I am visiting a school, and then I’ll have two days of napping and eating. I might try to catch a movie too. I don’t watch too many of those these days. 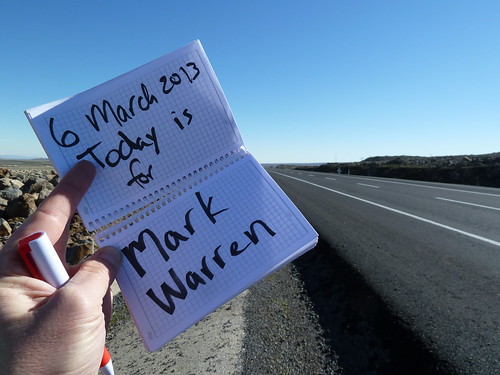 Mark is a friend of mine from Seattle. We worked together at Progressive International (not the insurance company).

Today’s walk was about 32 km (20 miles), starting at the provincial border between Urfa and Diyarbakır, and ending at the village of Tokaçlı.

When I started walking the air temperature was 0 degrees Celsius (32 degrees Fahrenheit), and the crosswind so strong the bus door would not open until the attendant started pushing into it with his shoulder.

I usually take photos of the signs at the provincial borders, but not today. As soon as I stepped off that bus into the freezing wind, all I could hear was my brain yelling at me to "go! go! go!", not "stop and take a photo."

It was a little windy out today. To keep from getting blown over, I had to lean way to the side while I walked.

So when a man who looked like a shepherd waved me over to a small stone shelter I eagerly headed in his direction.

“Roj baş,” I said as I walked up to the door. Greetings.

He showed me into the shelter and invited me to sit down for tea. I took a seat next to the stove and warmed my hands.

A friend of his was standing near the door. The friend and I greeted each other.

The tea was brewing. “It’s not ready yet,” one of the men said. “Give it a few more minutes.”

From the road I had noticed there were no sheep near the shelter. I started to wonder again where the sheep were.

I took a closer look at the camouflage fatigues and headscarves the two men were wearing.

“These aren’t shepherds,” I said to myself.

I didn’t know where their loyalties lay, and I didn’t want to. I took a rain check on the tea and told them I must be going.

We said our goodbyes and I headed back out into the wind.

While I was walking out of Siverek this morning about eight 10-year-old boys came running up to me.

One of the boys was jumping up and down, gesturing wildly, his face contorted in anger, yelling that Syrians were not welcome and that I should move on.

I turned to face the boys and took off my sunglasses.

While the angry boy continued jumping and screaming, I chatted with his friends and began introducing myself.

“Where are you from?” one of the boys asked.

“I am an American,” I answered.

Upon hearing this, the angry boy calmed down a bit, pushed to the front of the group, and introduced himself as “Ronaldo” (a famous footballer).

“Nice to meet you, Ronaldo,” I said. I shook his hand, and then shook a few more before turning back around and continuing to walk.

By that point the angry boy had calmed down enough such that the expression on his face said, “I should still be angry about something, but I’m not sure what now.” Before I got too far away he caught up to me and reintroduced himself using his real name.