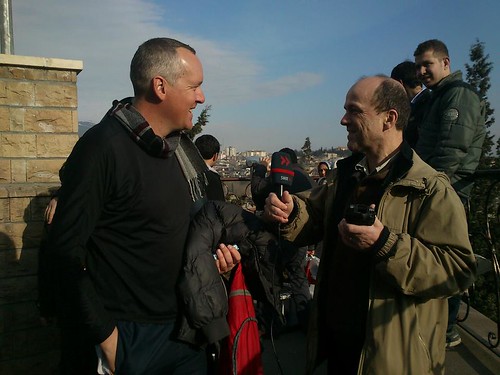 Yesterday at the castle in Kahramanmaraş, Emine and I ran into a crew interviewing locals for a German radio station.

They were gathering local opinions on the deployment of German troops to support Patriot missiles that will be placed in Maraş and aimed at Syria.

Both of the two interviewers, Tomas (shown above) and Mehmet, had read about my project in the newspapers and took advantage of our meeting to interview me about the walk.

I asked them what they were learning about the local opinions of the Patriot missiles. The main opinions they were running into were "I hope the Germans soldiers have a nice touristic trip here," and "why does Maraş have to be made a target?"

“The secret of the region’s new strength lies in its ancient links with Syria and Iraq. Antep is on the old silk road that leads to Aleppo.” –from The Economist

Here’s the rest of the article… 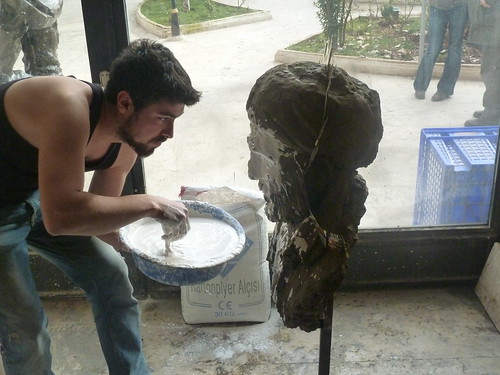 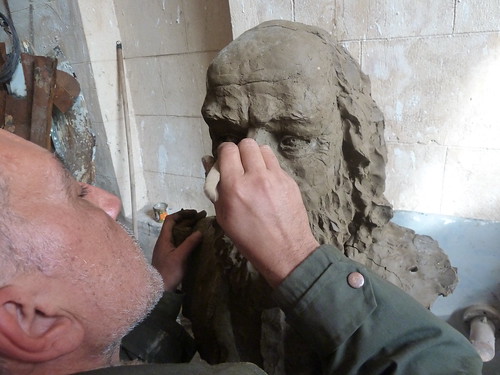 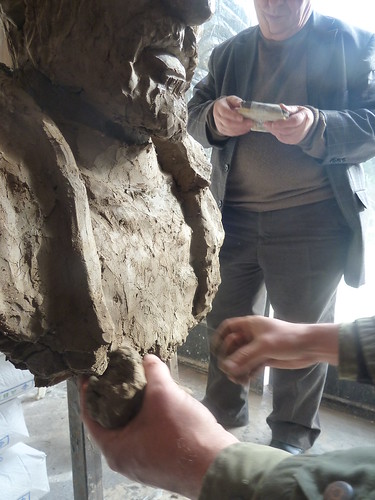 Got to watch some sculptors at work today.

When cracks open up in the clay, Mehmet bey has to fill them in. 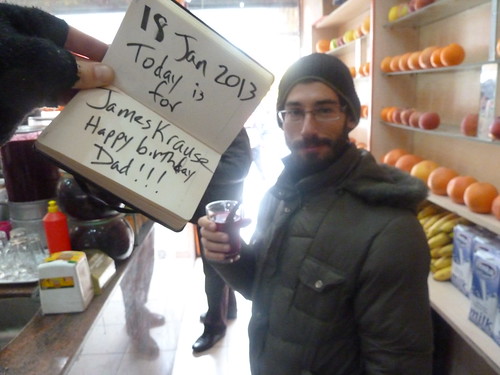 Today was a rest day, no walking, so today’s "Today is for…" photo is a little different than most.

I toured around Gaziantep with my fellow couchsurfer Thomas. I got to play tour guide, even though I’m more of a newbie in this city than just about anyone else. Here I am inflicting şalgam on Thomas, making him drink the stuff, knowing full well how bad it tastes to someone who hasn’t acquired a taste for it yet. 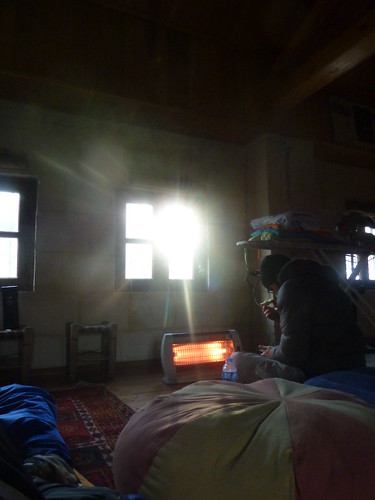 My couchsurfing host in Gaziantep is hosting another traveler too. His name is Thomas. He hitchhiked here from Italy.

His sleeping bag is a little chilly, so he was happy to see the heater this morning. 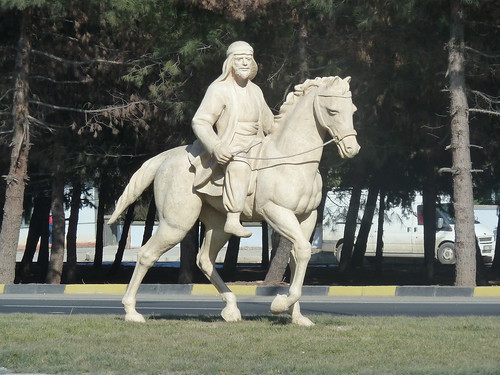 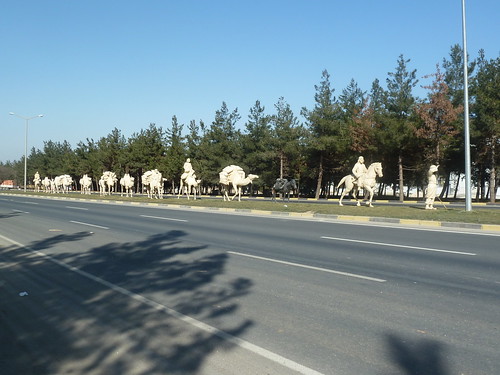 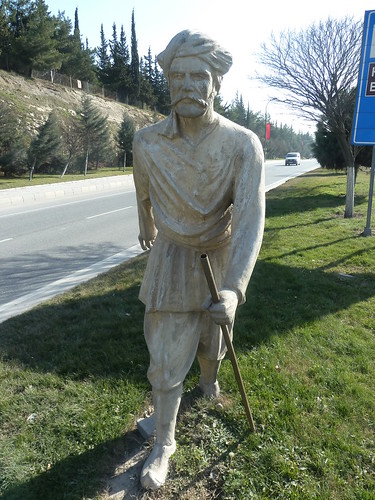 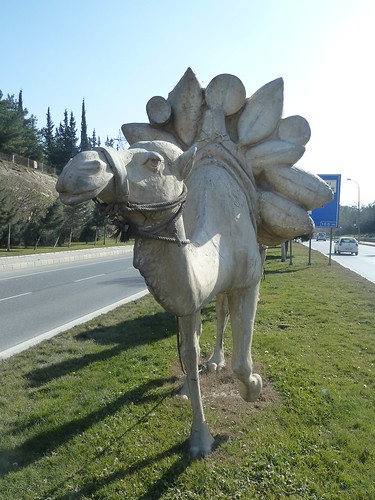 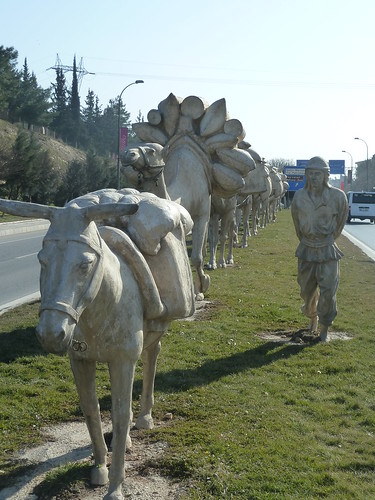 The main drag into and out of Gaziantep is nicknamed "The Silk Road." There are statues of two Silk Road caravans along that street, one leaving the city, the other entering it.

This is the one leaving the city, heading west. 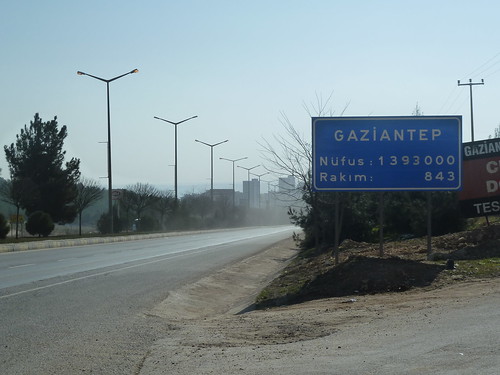 When I got to Konya, which was 30% of the trip done, I only had the physical and mental strength to load myself into a bus and wash up on someone’s doorstep.

Last night I felt the same way. This time the doorstep will be in Mersin. I have a few social calls to make in this area first, and then I head to Mersin for a week. 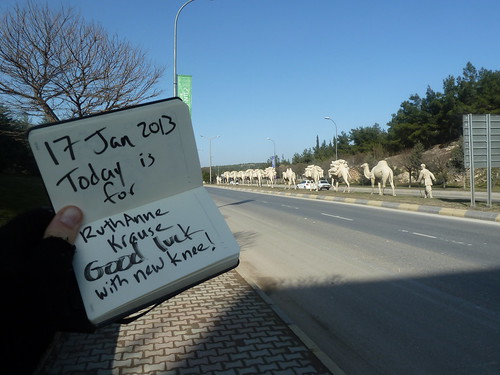 Today my mom goes in for knee replacement surgery (she had the other knee replaced last year). Good luck on the surgery Mom, hope you enjoy your new (second) knee!

This is a set of statues of a Silk Road caravan leaving Gaziantep. Thought it might inspire you to get up and walk on that new knee! 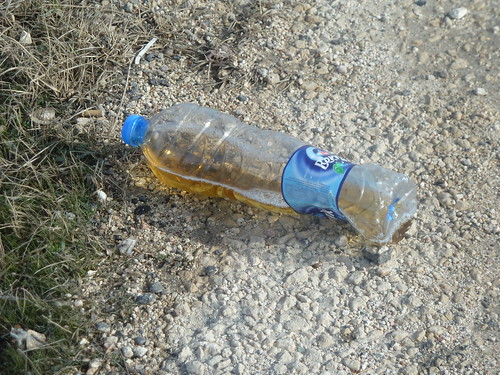 For months I’ve been walking by these things wondering why people were filling water bottles with apple juice and then throwing them out onto the shoulder. 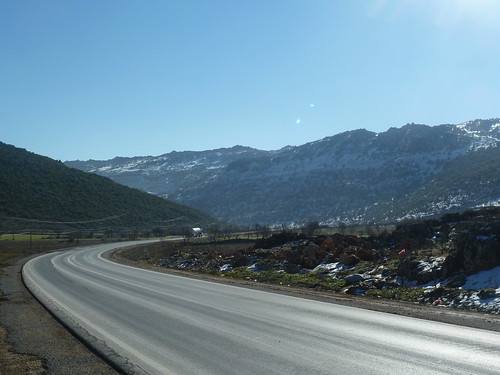 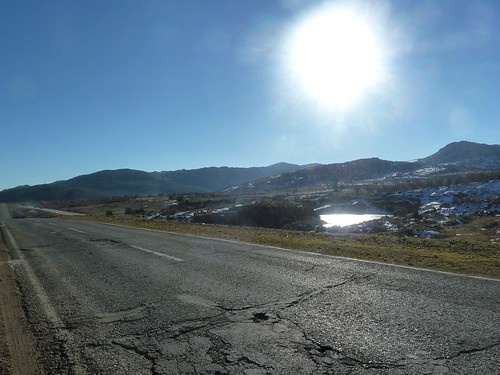 Today was mostly a very gradual downhill for 30 kilometers (20 miles). 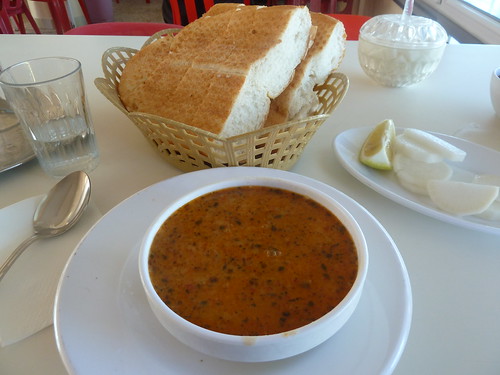 Ezogelin soup, bread, and tea at a truck stop about 30 kilometers (20 miles) west of Gaziantep. 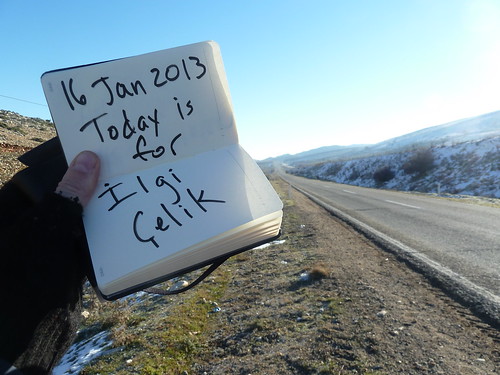 İlgi is one of my new friends in Osmaniye.

After I boarded the minibus for my commute to work this morning, a Syrian truck driver from Aleppo, Syria, tried to board, too. He was heading back to the border. He only had Syrian currency with him. The driver would not accept it, and he told the Syrian guy to get off and find a currency exchange. I called out to the Syrian guy to get back on the bus, I would cover his fare. People do me favors on the road all the time. Taking the opportunity to help out a fellow traveler was the least I could do.

About a half hour after I got off the bus and started the day’s walk, a journalist from one of the papers (Sabah) called me for an interview. There I was, standing by the side of the road out in the middle of nowhere, doing a phone interview with a national newspaper over the din of truck traffic.

My main job for the day was not to pay Syrians’ bus fares or talk to journalists, though. It was to get a particular climb out of the way, the climb from 1850 feet (560 meters) to 3750 feet (1140 meters) feet. For the next two months I’ll only be making two very brief forays to that altitude. They aren’t that big a deal, since I was at that elevation, or higher, on the Central Anatolia plateau, and I will be significantly higher on the last leg of the trip near Van. They are relatively significant climbs for this section of the walk however, so I was happy at the end of the day today to have banged one of them out.

The walk over for the day, I hopped a minibus and commuted back to Gaziantep for the night. Mustafa made a delicious dinner of köfte (meatballs), and we had some tea while I uploaded photos and he studied for a professional certification exam (tax law). Then I hit the sack.