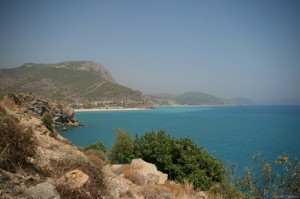 I’ll reach this section about three months into the trip, after about 9 weeks of walking and a couple weeks of downtime. I’ll finally get to see the sea again, having seen only river valleys and high plateaus since saying goodbye to the Aegean on Day One. This time around the sea will be the Mediterranean, though, and I’ll get to walk along it for a full week. Not just close to it. Right next to it, as in, much of the time I’ll be able to throw a rock and watch it land in the water.

I expect to be walking this section in December. Since this area is at or near sea level, the climate is Mediterranean, and in December that means average temperatures in the mid-40s (Fahrenheit) at night to mid-60s in the day (middle single digits to high teens Celsius). It may be raining a lot, as often as 3 days a week, so I might see water coming from the sky. 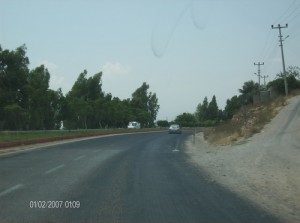 Road between Silifke and Mersin

Some of history’s biggest names have passed through these parts. Christian Apostle Paul was born in Tarsus, a town I’ll pass through on this leg. Marc Antony and Cleopatra met in Tarsus. Alexander the Great passed through this area on his way to conquer Persia.

Originally I had planned to get to this area by descending off the Central Anatolian plateau via the Cilician Gates (Gulek Bogazi in Turkish). For thousands of years the Gates has been one of the most popular routes for anyone traveling between Europe and the Middle East, so a lot of people have been through the Gates at one time or another.

Then Kate Clow, a treasure trove of information on traveling this part of the world, mentioned that the Cilician Gates was extremely narrow and clogged with tanker trucks. She pointed out an alternate route, descending from Konya to Silifke, which I wrote about in a previous installment. I weighed the two options — a dangerous week defying death on non-existent shoulders, dodging hundreds of tanker trucks careening downhill in one direction and belching forth tons of exhaust climbing in the other, or a week strolling along the Mediterranean. No contest. Thanks for pointing out the alternate route, Kate. 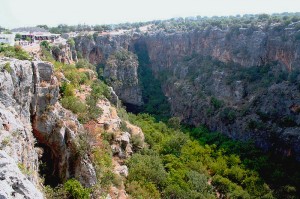 "Heaven and Hell" - This is a picture of Heaven. I'll let you know what Hell looks like when I get there.

Not only will I spend an entire week walking with the Mediterranean on my right, I’ll be passing a bunch of old stuff on my left — after all, this stretch was basically a bedroom community of the Roman Empire. I’ll see Cennet ve Cehennem (“Heaven and Hell”), a pair of canyons a couple miles inland. I’ll also see Kanlidivane (“Bloody Insane”), an ancient city built around a sinkhole. The origin of Kanlidivane’s name is unclear, by the way. It could be a reference to the area’s reddish soil, or it could be the legend that in Roman times criminals were thrown to their deaths in the sinkhole.

Mersin, Pearl of the Mediterranean 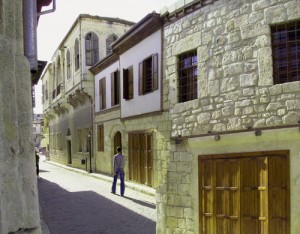 From Mersin the narrow belt of flat land along the Mediterranean opens up into the wider Cukurova Plain. About two days onto the plain I’ll hit Tarsus, a city of about 240,000 people. This is the city that’s the birthplace of St. Paul and is also the place where Antony and Cleopatra met. Tarsus doesn’t have a whole lot in the way of more recent famous people though. The closest they get nowadays is Muhtar Kent, the current CEO of Coca Cola, who went to high school in Tarsus.

After Tarsus I have almost two weeks of walking through some of Turkey’s most fertile and productive agricultural flatlands. I’ll also be passing through Adana, home to more than 1.6 million people and known for its spicy kebabs.

Not much changes in the space of a couple thousand years — the Cukurova is still a major transit hub for overland traffic between Europe and the Middle East, so there are plenty of warehouses and truck depots for me to spend an entire week walking past. Walking southern Turkey’s warehouse district might be kind of an aesthetic letdown after a week strolling Mediterranean beaches, but it will be followed by about two months walking through the cradle of human civilization, so I’ll get over it.

Cradle of human civilization coming up in the next couple installments.

Next: Back in the hills — Osmaniye to the Euphrates