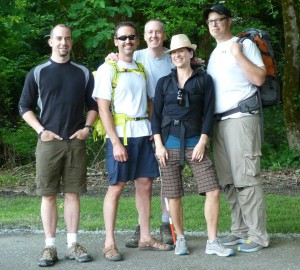 I had the pleasure of walking my 1000th mile in Portland this weekend with my good friends George Gibson and Tim Waters, and George’s sister Lisa and her boyfriend Josh. We walked 18 miles round-trip along the Willamette River — south from downtown Portland to Lake Oswego on Saturday, and then back to downtown Portland on Sunday.

I have known George and Tim for many years and am proud to call them friends. Here are a few reasons why:

George was diagnosed with Multiple Sclerosis in his mid-20s. He is legally blind now and cannot do some of the things he could do years ago. He can, however, do things that would impress the hell out of most able-bodied people.

For example, when I called him one morning two weeks ago he was walking home after dropping off an old steel wheelbarrow for recycling. He had pounded the wheelbarrow into a more compact cube of scrap metal. He then loaded the 25-pound cube into his backpack and hiked to the recycling center. When I spoke to him he had already left the recycling center, but he was still miles from his home in West Seattle. The things the rest of us would normally load into the back of a car he now stuffs into his backpack and carries across town.

(Another typical day in the life of George: while on vacation in Hawaii a few months ago, he rescued a drowning woman.)

My friend Tim recently came back to the US after multiple tours in Iraq and Afghanistan. He is getting reacquainted with three sons he hasn’t seen in a while, including one who was born while he was away. As if that wasn’t enough of a challenge for reintegrating into civilian life, he also went out and started a non-profit foundation to help other veterans coming off active duty.

(By the way, I called this post the Portland edition because the next rolling of the odometer will happen over the Tigris river, insallah.)

(Another by-the-way: I blew past three week-long rest periods in order to rack up the miles in time to hit this milestone in Portland. It was nice to have friends around me and all, but I’ve spent the past few weeks feeling like a rundown old man, instead of the healthy young buck I’d like to be. If I try to pull something like that in Turkey, please rein me in — it’s not sustainable, running the engine too hot like that.)

Next: A few thoughts on self-publishing…