This leg begins at Denizli, a city about 1,000 feet above sea level, with a population of about 500,000. From Denizli I will climb about 2,000 feet onto the edge of the Central Anatolia plateau. The climb is very gradual — it’ll take me about a week, since I’ll only be covering about 12 miles a day.

Near the top of that climb is Lake Acigol, a name which is a little redundant since “gol” already means “lake” in Turkish. “Aci,” by the way, means “spicy,” “bitter,” or “painful.” Acigol is a relatively small salt lake, about 2% of the size of Utah’s Great Salt Lake. It is also a shallow lake, less than 2 meters (6 feet) deep, meaning that even if I swam out to the middle my feet would still touch the bottom. It may be small, and it may be shallow, but I am looking forward to walking past it. Passing it means I have definitely left the river valley and climbed onto the plateau.

I’ll be on the plateau for about four weeks, and during that time I’ll be skirting the north edge of the Taurus mountain range. The Taurus is a 1200-mile-long mountain range separating Turkey’s Mediterranean coastal areas south of the range from the Central Anatolia plateau north of the range. The range runs from Turkey’s southwest corner, where I’ll be at this point, all the way east to the headwaters of the Tigris and Euphrates rivers. Many of the range’s peaks are 10,000 to 12,000 feet above sea level. I, however, will spend most of the month walking the relatively flat plateau at elevations ranging from 3,000 to 4,000 feet. After a month on the plateau I’ll take a right and head south, dropping off the plateau for a brief one-week foray through the lowlands along the Mediterranean coast. When I make that descent from the plateau, I’ll be threading my way through the Taurus mountains. Let’s not get ahead of ourselves, though; I’ll save writing about that portion of the journey for a future installment.

Acigol also marks the beginning of Turkey’s Lake District. The Lake District is an area on the plateau with about a half dozen lakes. The largest, Lake Beysehir, is only about a tenth the size of the smallest of the Great Lakes in the US, but this is not a part of the world famous for having a lot of water, so you don’t have to have a lot of big lakes to have a lake district. 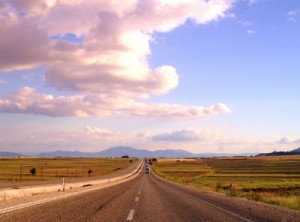 Between Denizli and Acigol the land usage transitions from farming to open pasture, and past Acigol I’ll definitely be seeing more pastures than farms. The area past Acigol is sparsely populated. Each day I’ll be passing through one or two small villages with populations of 5,000 to 10,000. Only once during this two-week period will I pass through a larger city, Isparta, population 225,000. In fact, during this two-week period there may be a day or two where I see individual houses, but probably not any villages. 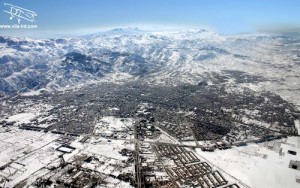 The city of Isparta, a provincial capital, is also known as “The City of Roses.” It is the hometown of Suleyman Demirel, former prime minister and president of Turkey for most of the 1990s.

Isparta is directly north of the coastal city of Antalya, about 70 miles as the crow flies. Separating Isparta and Antalya are the mountains of the Taurus range though, so it’s definitely not a clear shot to Antalya’s Mediterranean shores. There is, however, a two-lane highway running south from Isparta, dropping off the plateau to Antalya and the Mediterranean Sea. I won’t be walking that road though. I will be continuing east. 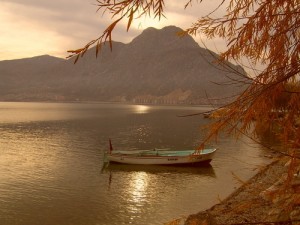 About two days after passing through Isparta I will arrive at Lake Egirdir. By then about two weeks will have passed since I left Denizli, and I will have been walking for about four weeks total. I suspect I’ll be ready for some downtime, so I’ve targeted Egirdir for a one week layover, a time of rest before continuing further along the plateau.

Next: Why I want to walk

Previous: Solo but not alone